From the Guggenheim’s Art Of The Motorcycle at the Field Museum, to the distinguished theatre of Milwaukee’s 100-year-old library, the recent movement of Biker Poets has entertained all walks of life, attracted press, and tapped into America’s love affair with the motorcycle. 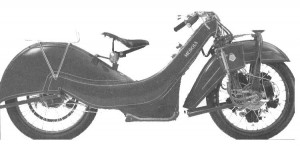 Their poetry has taken shape as live “Slams” in bars and at biker meets, on PBS and festivals as poetry videos, on radio as readings, and as performances in the nation’s most distinguished institutions. Like the internationally acclaimed Poetry Slam, Biker Poetry performances engage their complete audiences, whether that audience has interest in motorcycles or poetry, or neither. These are performances full of theatricality, comedy, and passion, and often audience participation.

Where can you find William Shakespeare, Harley Davidson, Iambic Pentameter, and 300 Tattoos?…at a “Wild Ones” Biker Poetry Slam!

Yes, bikers are sensitive too! Some of them are “coming out” to share their feelings in verse! Like the “Wild Ones” Biker Poets located in Chicago. Sandwiched between rock bands and tattoo contests, these bikers reveal their inner selves by performing their poetry at biker bars, motorcycle meets, radio stations, and television. Their video poems have raised eyebrows not only at national film and video festivals, but on PBS, too!

How is biker poetry being received? Imagine Saturday night at Desperatos bar, West Chicago. The bar is packed with black leather, beards, babes in tattoos. Beers are being raised. Smoke is swirling in the light above the pool tables. The volume outside as Harleys pull up matches the party within. Suddenly, quiet ripples through the room as poet Rob Van Tulye begins his poem on stage describing hot summer rain, the feel of the highway, and his woman beside him, as he rides by the light of the white August moon. The poem concludes to the roar of hooting and applause.

While these bikers are eager to break the negative stereotypes earned by gangs and Hollywood, they are just as eager to maintain the biker’s lifestyle of nonconformity, independence, and freedom. Their work is spreading from coast to coast with biker poets popping up in Slams from Boston to Sterg’s. These biker poets are mothers, musicians, waitresses, even account executives. When they show up, get ready to be exposed to their souls through words! 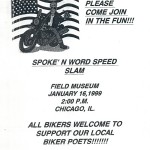 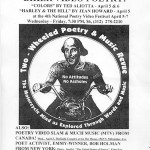 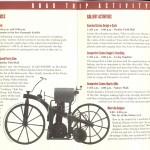 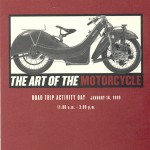 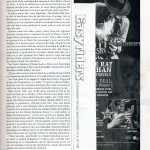 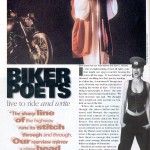 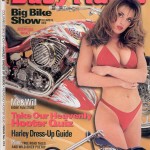 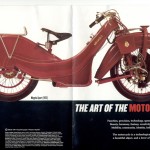 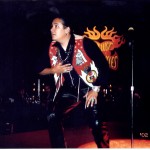 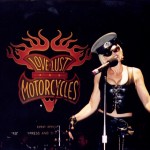 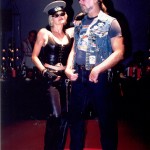 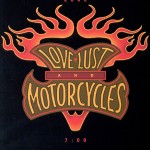